By KatHudson on 3rd December 2015 in Events 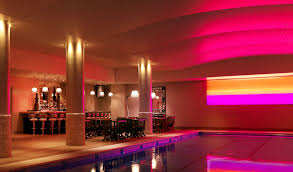 This is the busiest time of year for most us magicians. I did my first christmas party of the year last week (that’s right, in November!) to kick things off. It was a very classy affair and I was asked to perform close up magic at the wonderful Haymarket Hotel in London. They wanted a magician during the drinks reception around an indoor pool, which was a first for me.

It was a corporate, christmas party for Resource Fuelled LTD. I had a great time performing close up magic in a very cool setting. It was an intimate affair for around 20 people. I performed sleight of hand magic and mind reading for around an hour which was perfect. Some of the guests were still a little surprised when I approached the groups saying I was the magician. If people have been told a magician will be at the party, most people are still expecting it to be a man. I find that quite fun though and it’s my job to educate them and let them know us female magicians do exist. Being a female magician adds a little something extra to a christmas party I think. Table magic isn’t just for boys.

I even managed to read the bosses mind, which earned me lots of praise from his employees as is it is something they’d been trying to do for years. I produced money from nowhere in front of their very eyes which got everyone amazed and baffled (mainly because I didn’t have any sleeves). I still think most people assume that all magic is produced out of massive sleeves or indeed that sleeves are a must for tricks to work. I like to prove them wrong.

I love performing close up magic in London, especially at this time of year. There’s something magical about walking through Leicester Square with all the christmas lights on and the hustle and bustle of people walking through the streets. Then getting to perform for people that are in high festive spirits, really is a wonderful thing.