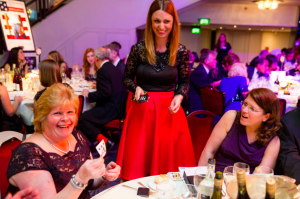 I was fortunate enough to be asked to perform table magic at The Daisy Ball this year. It is an event that is held every year at the beautiful Grosvenor House in London. This is the second year I have been asked to perform there along at the Grosvenor House in London with 9 other magicians. There were two female magicians performing, me and the lovely Kerry Scorah which was such a treat.

The Daisy Ball raises money every year to help research blood cancer. This was their 22nd year of running the event.

500 guests were in attendance which is why they needed 10 magicians. We were performing table magic between the beautiful 3 course meal which was laid on. I performed some mind reading tricks which stunned and  amazed people and the trick were a signed card appears in the back of a mobile phone. The picture above is the phone trick in action. You can see by their faces that it’s a good one and one of my favourite things to perform.

This was such a massive event held at the Grosvenor House in London that hiring magicians really was the right thing to do. Most people seated did not know one another. Magic is the perfect experience for people to share and to get them talking. I think it always leaves guests feeling special too. A magician hired purely to entertain them on such an intimate setting is truly magical.

Everyone was in such high spirits its was a great atmosphere to perform table magic at. It was great to work with so many talented magicians as it’s not often we get to see each other in action. Thanks to Mark Shortland for organising it. I loved being part of The Daisy Ball at Grosvenor House in London and am looking forward to next years. A lot of money was raised for a great cause too.