By KatHudson on 16th October 2015 in Uncategorised 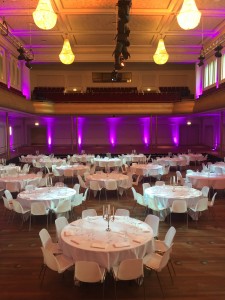 Last week I was fortunate enough to go and perform as a close up magician in Haarlem in Holland (I actually thought Haarlem was in Amsterdam as I’d never been before – always learning!). I completely fell in love with the place and the people. I do love being a magician, it takes me to places I would never have gone to without practicing magic.

I was doing close up magic for a company conference called Great Experiences by Qmatic in Haarlem. They are the people responsible for the voice overs telling us which till to go to. I even got to meet the guy behind the voice of all the post office queues ‘Cashier number one please’ That was a treat.

There were 200 people there from all over the world (as close as Amsterdam and as far away as India). Close up magic was the perfect entertainment and something that doesn’t need a common language to understand. I firstly did close up magic during a drinks reception that was held in the lobby. I performed two simple but visual pieces of magic to warm them up. An amazing trick with just 2 elastic bands and one where a playing card changes in the spectators hand. As a magician doing close up magic, it is important to know the environment you’re working in and adapt your magic to fit your audience. Needless to say I had picked the magics that everyone understood and were blown away by. I ended up with a few groupies following me around trying to figure out my wizardry for the rest of the evening. This seems to happen a lot to magicians, it’s very flattering.

I then did table magic during the meal. There were a lot of people there so I limited myself to just a few pieces of magic per table to get as many people to see me as possible. It is my job as a magician to put on an amazing performance with high energy for everyone that sees me. You only get between 5-10 minutes with each group of people so it’s important to make every second count. I went straight in with one of my favourite tricks. Someone thinks of a card and then I make it appear in a deck of cards faced the opposite way to the rest. It’s a killer. I had so much fun performing close up magic that night. I worked my socks off and amazed people, or annoyed them depending on whether they were the kind that needed to know how the tricks were done. I’m glad i figured out before I got a cab from the airport that Haarlem wasn’t in Amsterdam. That would have been embarrassing. I t could hardly speak the next day but it was worth it 🙂