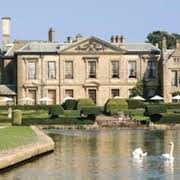 This weekend I performed in Coventry and Daventry. On Friday evening I performed at a 50th Wedding Anniversary dinner at Coombe Abbey Hotel in Coventry. The evening was very decadent and everyone dressed up glam for the occasion. The happy couple decided to go for a wonderful 3 course meal with their friends and family and hired me to perform table magic in between the courses.

It was a very relaxed affair, they had a band playing soft music in the back ground which added to the atmosphere. It’s sometimes worrying for magicians when clients say that they are going to be a band on. I’ve been to perform in places where the music was so loud that I had to shout for people to hear me. No one wants someone shouting over them whilst they’re sat down trying to enjoy themselves. The levels here were perfect and a little background music worked wonders.

There were lots of families at the dinner so a vast array of ages. Magic communicates to people on so many levels, I think close up magic is definitely the type of entertainment to have to keep everyone happy as you adapt it for each group. I had such a wonderful time, I find people are often intrigued that I am a close up magician as I’m female. They’re aren’t may of us around so it’s always a little added extra surprise when I turn up. I still managed to fool even the most sceptical of the bunch and managed to make people laugh on the way.

On Saturday evening I performed at The Daventry Court Hotel in Daventry. It was a conference for a group of solicitors. They had organised a drinks reception were casino tables were set up, glasses of champagne were being given out and I was performing close up magic.

There were about 100 people there and I was there for 90 minutes before they were seated for dinner. I walked around groups performing my close up magic, which encouraged people to mix and mingle. It always starts of conversations when people experience something new together. I am always really pleased that I am a part of that. I met some great people that had never seen a magician close up and they could not quite believe what was happening in front of them.

I got to try a new trick too. I tear a corner of a card off, swallow it and then make the card magically whole again. I got great reactions from it and people were begging me to reveal how it was done. I was even politely asked to stay and have dinner and drinks, although I mainly think this was down to people assuming after a few drinks I would reveal all my magic secrets. Nice try 🙂