By KatHudson on 5th October 2015 in Events, Magic 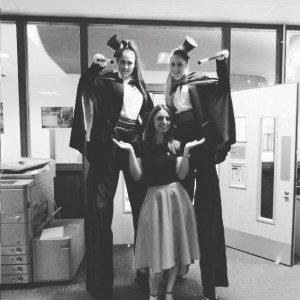 I had a very unusual job last week. I was hired by the Sirius Academy school in Hull. They were hosting an ‘It’s a kind of magic event’ at an open evening for new students and parents. I was just the right magician to go and perform close up magic for them. To get asked to perform at my home town Hull was a real treat too.

I have never performed close up magic at a school where there hasn’t been some sort of party going on. There was a Harry Potter themed room set up, games areas, ice cream making and they even hired stilt walkers. As parents entered the reception area, their children were given magic wands and I got to show them some close up magic.

I have never heard of any school going to so much trouble to put on an evening that would entice new pupils to join them. It was great that I got to be part of it. Magicians usually only get booked for parties generally so I was really glad the magician they chose for this was me.

One little girl stood out in particular to me, when I showed her a trick I do with elastic bands she was so amazed. She stood with her mouth wide open for at least a minute and simply said ‘Wow’ in a loud voice. It was great to look up and see that her parents were doing the exact same thing.

I even got to help out some new budding magicians that attended the school in Hull. They even showed me some tricks. They followed me around all evening watching my close up magic. I definitely got a little taste that evening of what it must be like to be a famous magician 🙂

The teachers I performed my close up magic for in Hull said they would not be able to sleep that night, they would be sat pondering how I did it. I wonder if they did?