By KatHudson on 20th July 2017 in Uncategorised 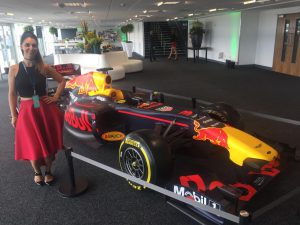 I was extremely thrilled to get asked to entertain hospitality guests at Silverstone over the weekend for Formula 1. It was a very exciting weekend. Although admittedly I’m not a massive fan it was still amazing to be asked and even more amazing to be there for 2 days.

I was asked to perform close up magic at The Paddock Club. There was lots going on – musicians, photo booths and champagne on tap – to name a few. I got to mingle with VIP groups of people before and after the race and practice laps started. It was a great atmosphere and close up magic gave it that little extra bit of excitement.

Guests are invited to spend a full day there at The Paddock Club The race is only on for a small fraction of that time. It was a very good idea to have me perform in between the race and warm up laps, it kept people engaged and got groups chatting. 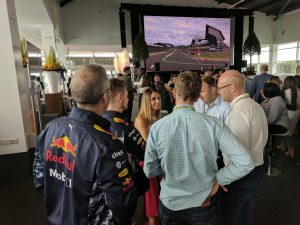 I even got to try out some new magic that I’ve been working on. I borrow a ring and put it on a nice red velvet rope. I then make the ring cut through the rope without a hole being put in either one. Amazing or what?! It’s my new favourite thing to perform at the moment. I love the reactions people give and there’s a big surprise finale at the end that I won’t ruin for you here. 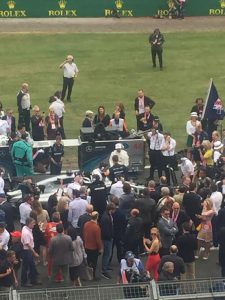 Being a female magician it is sometimes difficult to come up with new material. I don’t always have the pocket space to do some tricks. I much prefer borrowing your items to do close up magic, that makes the trick even more amazing and I don’t have to carry around extra items with me. Everybody wins.

It was the first time this year that they had magicians perform at the F1. I’ve been told it was a complete success and something that will continue at Silverstone in The Paddock Club now. I am extremely happy about this and can’t wait to go back next year. You never know where close up magic will appear, usually in the most unlikely of places 🙂