Last night I performed at the wonderful Marriott Hotel in Leicester.

It was for a lovely couple who were celebrating their diamond wedding anniversary. They held a lovely dinner followed by a live band for a bit of dancing. It was my job to wow people with my close up magic during the meal. 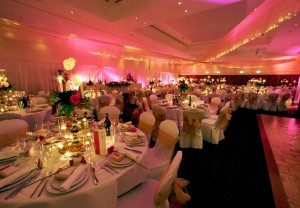 I only got chance to take a quick pic of the room before everyone arrived. I was too busy doing the magics once everyone got there I and completely forgot!

I was a complete surprise to most people which is always fun, the added element that I’m a female magician and don’t dress like a typical magician also leaves people still questioning if I’m telling the truth before I perform. I love doing table magic and the people I performed for did too. One gentleman who I won’t name (James) followed me around most of the evening as he was dying to find out how I made his chosen card appear into his own hand, obviously his conclusion was that I was clearly some kind of witch 🙂